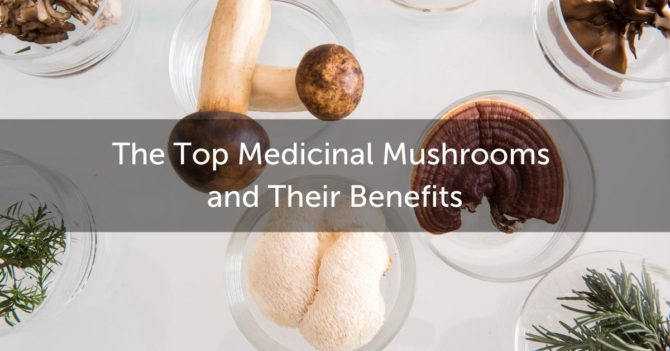 The Ultimate Guide to the Immune System and Medicinal Mushrooms

It’s easier than we may think to pick up an infection. A simple way to balance the immune system is with medicinal mushrooms. Below, we’ll take a quick look at a variety of medicinal mushrooms, their properties, and how they aid the immune system. For more detailed information, check out, The Healing Power of Medicinal Mushrooms: Immune Support For Cancer, Colds, And Lifelong Health by Dr. Isaac Eliaz, MD, MS, LAc.

Medicinal mushrooms have been a staple in ancient medical systems for millennia, to fight a wide range of illnesses and promote optimal vitality. Today, scientists and doctors around the world are following in the footsteps of these ancient peoples to explore how medicinal mushrooms can be translated into modern medicine.

Why Haven’t I Heard Of Medicinal Mushrooms Before?

Information about traditional folk remedies can take ages to make it to mainstream medicine. However, now pharmaceutical companies look at mushrooms as rich sources of innovative biomedical molecules.

How The Immune System Works

Before we start examining medicinal mushrooms and their impacts on immunity, let’s first explore some basic functions of the immune system.

The Primary Function Of The Immune System

In the most basic of terms, the immune system protects the body from things like germs, infections, and abnormal cells that can make the body sick. Different organs, cells, and proteins come together to form the immune system.

How Does The Immune System Protect Us?

There are three main goals a healthy immune system must accomplish:

The Two Parts Of The Immune System

The immune system is divided into two parts—innate and acquired— which function in harmony to protect your health. Below we’ll take a look at these two arms of immunity, and define some of its key building blocks—specialized cells and components that make up the immune system as a whole.

We are born with this part of the immune system, and it works fast. The innate immune system sends cells, called phagocytes, to ambush a harmful invader, surrounding and swallowing it. Once the intruder, be it a virus, bacteria, fungus, or something else is absorbed, the phagocytes destroy it.

This part of the immune system is more subtle. If the innate immune system is a mallet, the acquired immune system is a lockpick. Cells called B lymphocytes develop antibodies in response to a specific threat. When an invader comes into the system, these B lymphocytes take the time to get to know it. Then, they make antibodies, which are cells specially targeted to fight off that specific threat. These cells are like a key that fits into a lock, allowing the immune cell to break through the germ’s defenses. The next time it comes back, your immune cells will be ready. The acquired immune system evolves each time it comes into contact with an enemy, so it’s always working to stay ahead.

Building Blocks Of The Immune System

While the acquired and innate immune system are the two subsections of the main immune system, they can be broken down into smaller parts. Various parts of the body make up the immune system and help fight off invaders.

These cells work as the ‘bombers’ of the immune system. Gripping onto an invader, the NK cells inject them with a protein and specific enzymes to make them explode.

There are many varieties of T-cells, also known as T-lymphocytes, which help defend the immune system. Each variety of T-cell plays a different response in immune protection.

Lymphocytes are the white blood cells that fight off invaders to the immune system.

These are the pathways that lymphocytes, like the ones that develop antibodies, use to travel around the bloodstream.

These are chemicals that are produced by lymphocytes, that tell other parts of the immune system to either stand down or attack

These are white blood cells that act like macrophages in immune system defense. They leave blood vessels and head towards the site of inflammation to combat infection.

Why We May Not Want To “Boost” Our Immune System

In an ideal world, we’ll have just enough cytokines around to let our cells know when something is brewing. However, sometimes the immune system can become overwhelmed. When this happens, galectin-3, the protein that sounds the alarm on immune invaders, will become hyperactive and produce excessive inflammation.

Then what happens? The body can get what’s called a cytokine storm—where the body is overwhelmed by out-of-control inflammation. Cytokine storms can lead to shock, organ failure, and death.

This is why we need to focus on optimizing, supporting and balancing our immune system—an areas where medicinal mushrooms excel. They have the ability to make the immune system smarter, by regulating its activity. They direct the immune system to fight off invaders in a safe and balanced way, so it neither overreacts, nor under-reacts.

Medicinal mushrooms are not just one type. There are many different mushroom species that could be categorized as “medicinal”.  However, this list will get us started.

10 Medicinal Mushrooms For The Immune System

PSK (Polysaccharide-K) is an active compound of Turkey tails that amps up the production of interferons, which are proteins produced by the body to alert the immune system to a threat. PSK also has antioxidant activity.

There’s a possibility Turkey Tail could help fight against HIV infections as well as hepatitis B. It’s also shown to support immunity against genital herpes, balance symptoms of lupus and rheumatoid arthritis, and help the body with infections of the respiratory, digestive and urinary tracts.

Reishi has been shown to fight HIV in some studies. In animal studies, it is shown to protect against ionizing radiation. For respiratory health, it’s shown to support the body against chronic bronchitis. It is shown to work well in supporting immune response to sarcoma, a group of cancers that affect the bones and connective tissues of the body.*

Caterpillar mushrooms support the performance of the immune system, accelerate production of certain antibodies, and balance the power of monocytes, a class of white blood cells.*

Maitake supports production of macrophages, NK cells, and T-cells. In HIV studies of individual cells, up to 97% of T-helper cells were protected by maitake.*

Wood Ear helps certain types of white blood cells increase their production of DNA and RNA. It also works as an anticoagulant and antioxidant, and supports wound healing.*

Compounds in shiitake show activity against various bacteria, viruses (including influenza) and parasites. Additionally, one specific compound it contains, Lentinan, is shown to have anti-tumor activity  Shiitake increases the activity of macrophages, NK cells, helper T cells, and other immune components. One report showed that Lentinan successfully reversed drug-resistant tuberculosis in 3 patients.*

Lion’s Mane supports the gastrointestinal tract. This mushroom works with the immune system to balance excess inflammation, protect against tumor formation and defend against toxins from the environment. Also, it is shown to support white blood cell production.*

What Else Can Medicinal Mushrooms Help With?

Mushrooms offer a wealth of total-benefits beyond immunity. They can also help with:

Yes. Medicinal mushrooms are not ‘magic mushrooms’. Some of the mushrooms we might use for medicinal reasons, like shiitake, are also culinary mushrooms which can be found in the produce section at a local grocery store.

What Is The Dosage For Medicinal Mushrooms?

There are, at minimum, 270 different medicinal mushrooms. Depending on which ones are used, and what they are used for, we’ll want to take different amounts. Each formula should give a dosage amount. Mushrooms are very safe, and can be taken in relatively high doses.